As Potato is a single page game, here it is: 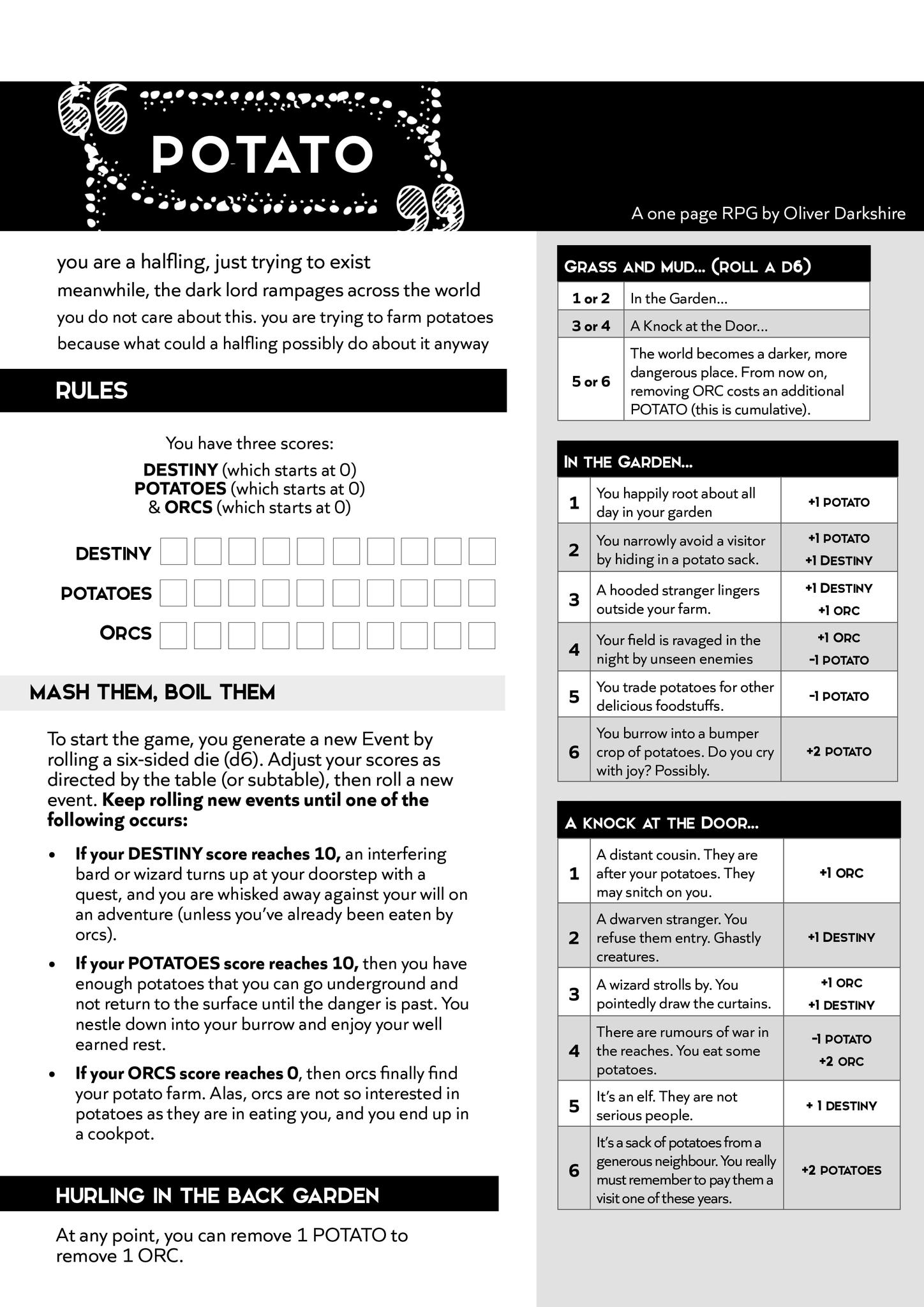 Potato was mentioned in this question as an example of a one page RPG, and the objection was raised in the comments there that it wasn't an RPG. My question here is not about the closure of that question in particular, but rather more generally, is Potato an RPG, or are questions about Potato off topic for our stack?

The author clearly intended Potato to be played as an RPG.

A premise I hope we can all agree on. I've had a successful harvest, locked myself underground, and the orcs are none the wiser. Just me and 1,000 potatoes in a heap on the larder floor. Each day I eat one of my potatoes. If 1,000 potatoes is a heap, certainly 999 is as well. Each day my heap of potatoes shrinks, and yet each day it continues to be a heap. But then comes the last day, the 1000th day of my respite from orcs and farming and the world. I've one last potato, but something has happened. I do not have a heap any more. Thinking back to yesterday, I had two potatoes - still not a heap. Somewhere between my first day and my last day, my heap stopped being a heap.

This problem is the well known Sorites paradox, classically formulated using grains of sand instead of taters. It seems that Potato the game is riding that unknowable line between heap and not a heap. Obviously, a game like Pathfinder is an RPG - a heap of potatoes. And in comparison, Potato has taken some potatoes from the heap. It only has one role to play, the hobbit, and it is a solo game, so cooperation with other players has been taken out. But surely these two potatoes (choice of role and cooperative play) are not the essence of an RPG.

So what's missing? I've seen some arguments made in comments that other games that are obviously not RPGs could add some number of elements and be as much an RPG as Potato (arguing "not an RPG"). Maybe, except the authors of those games didn't do that. Yes it's simple, no there aren't a lot of mechanical choices given. But complexity and diversity of choice are not requirements for being an RPG (as though there were some objective standard), and the author clearly intends it to be played as an RPG (they wrote RPG in the game's header).

So let's not have an identity crisis as a stack by trying to put to paper exactly what we think an RPG is supposed to be. There is already an epidemic in our hobby of smuggling expectations built on popular games like D&D into smaller, less known games. Potato subverts our expectations of what an RPG is, but the author clearly intended it to be played as one.

Potato is a heap.

The role you play in Potato is

'A Hobbit just trying to exist'.

In other similar games you might play someone who is Trapped in a Cabin with Lord Byron.

These are all roles, you just pick them at the same time as the game. You can tell stories about how the game went afterwards in the same way you can any other game here.

So yes, the 'role' aspect is constrained, and the 'game' part may not give many/any choices but I'd still say it's an RPG and therefore on-topic.

At their core, Roleplay Games are what the name implies : games where you play the role of a character in a story. Whether that game is freeform or limited by strict rules, whether you're playing it in a group or alone, and even if you're the one telling the story or not, you're still playing the role of your character.

In that sense, I believe Potato is a RPG. The rules do not give much room for choices, in opposition to the usual RPGs, but you're still playing the game of "getting in the character and playing out a story.

Of course, you can just play out the mechanical aspect of it and reduce it to "roll dice, resolve, repeat". But isn't that the same with other, more common RPGs?

By certain definitions it's not an RPG but we don't really have a stack for what it is so its best home is here.

You can call them "journaling games", like The Quiet Year or How to Host a Dungeon or Sweaters By Hedgehog or Thousand-Year Old Vampire. The dice or other randomizers are there more as an oracle for a randomized future and your mechanical hooks of play are limited.

The point of the game is to run the randomizer to some end point and experience the events and maybe create an artifact of your own, like the namesake journal or some kind of hand-drawn map.

"Using a setup and a random progression to prompt stitching together a story in your own head" is the core feature here, and an activity a lot of more traditional RPGs also have a place for. While it can and does happen deliberately or incidentally in the board game or video game spaces, it's very rare to see a board game or video game where the entire point is just to get a setup and random progression and put the story together in your own head.

All of the games I listed in the first paragraph don't really section themselves off from more traditional RPGs in any kind of commercial space, and of the available stacks people who have played tabletop RPGs are the most likely to have the experiences needed to read and understand the rules.

Is a game book on-topic?

Nobody would claim that many of the game books are not at least in some way RPGs. You read a page, decide a path, read the next. On the way, you take notes and choose what items to carry around with you and finally meet one of the ends. You take the role of the protagonist of the story, you play his role and it's a game. A game book is pretty much the watershed area between a simple book where you watch the narrative unfold and a full-fledged RPG like Pathfinder or Rats or the World of Darkness. Or to say it with Thomas Markov's analogy: a Game Book is somewhere at the edge where a heap becomes just a couple of potatoes on the floor. Is the game book 5 or 10 or 100? I don't know, that might be book-dependent!

Potatoes is the essence of a game book

However, Potato does offer all the choice of the player in how to narrate it: Who is the visitor you hide from in the potato sack? Is that wizard trying to meet you wearing grey robes or is he all decked out in gold necklaces and armed with a boombox? That's up to the player!

In some regards, Potato is more strict than a game book, but it is much more about playing your role than game books, so... it is more of an RPG than game books!

No, not on topic for RPGSE.

It's a game of solitaire where you roll dice and see what happens. Calling this an RPG is a stretch at best.
It's about roll playing, not role playing.
This could be fun on a long bus or plane trip, though, and help to pass the time.

As I said on the question... that is not a game. A game is defined by actors making decisions.

Any length of text is not a game. You read it. It's a book. Only when it includes a decision making process like a choose-your-own-adventure, it becomes a game, because you have now become an actor with agency.

Any video is not a game. You watch it. It's a movie. Unless it becomes very a different movie every time the player makes a decision. Then we call it a video game.

A deck of playing cards is not a game. Until you define rules how and when to make decisions and what consequences those decisions have, then it becomes a card game.

Potatoes has no in-game decisions. It has a single decision to make, and you can make that decision without any context, even before starting the game. You could even say it is not a real decision, because there is a mathematical optimization and you can make a good decision or a bad decision, but again, you can calculate that beforehand with no uncertainty.

It also contains no role playing. Someone said you can play it out. Yes. You can. It is not explicitely forbidden by the rules. But is that really our argument why it is an RPG? Because R is not explicitely forbidden? I could claim that doing my math homework on the bus on my way to school is an RPG. The teacher never said I was forbidden to roleplay and I think my elven x² was level 3 by the time the bus stopped.

We have pretty clear lines here. Choose-Your-Own-Adventure are not roleplaying by our standards. Games like Hero Quest are not roleplaying. Why? Because while you certainly can roleplay (and roleplayers probably will), they do not contain any material to do so.

So no. It is neither a game, nor roleplaying. So I don't see why it should be on topic here.

This is close enough to be on topic

What makes a role playing game1?

Potato is a game of solitaire dice rolling painted with a veneer of Tolkien. The near entire lack of meaningful decision making is why it fails as a role-playing game for me. Like in the childrens game "Tempo, little snail", the player has next to no influence on the eventual outcome, the game plays itself. With goodwill, you can consider the "Hurling in the back garden" mechanic to save the game from failing entirely on this count (even if there is an optimal strategy, which is very likely, the player may not know it or need to follow it).

However, I do think this is not a reason to close the question as off-topic. There are many questions on the site that are only tangentially related to the hobby of role-playing games, for example there are many questions about the statistical probabilities of dice rolls, that one could argue could belong on a statistics wiki. And while the community has drawn some explicit division lines around shopping questions or computer role-playing games, minigames is not one of them. I feel we can be more welcoming and inclusive in our scoping than to ban a question on a game like this, that overlaps in many ways with kind of games we enjoy discussing.

There are games without game masters, like the choose-your-own adventure books that can in the wider sense considered role playing games. You still imagine to be the main character, use rules (following the prearranged decision graph and sometimes simple mechanics to resolve fights), and make meaningful decisions at each node where you can choose one of serveral courses of action.

10
Three tag RPGs: we need a better system for tagging "one page three score" RPGs
13
What kind of questions can I ask here?