Are our implicit-information tagging practices becoming a problem?

We have some tags that seem to regularly get used such that they imply information about the post, which isn’t actually stated in the post itself.

These seem to be becoming a problem sometimes.

Not always! One of the standard uses of a system tag is to ask about a game’s mechanic, then use, say, the [dnd-3.5e] tag as the only definitive indication of what game you’re actually playing. This goes smoothly enough.

But it does lead to some problems in some cases.

1. Tagging multiple systems when their relationship is unclear

We’ve got this convention of describing the system only in the tags, right? This causes some problems in questions tagged with a mixture of [dnd-3e] [dnd-3.5e] and [pathfinder], though. Consider this question: 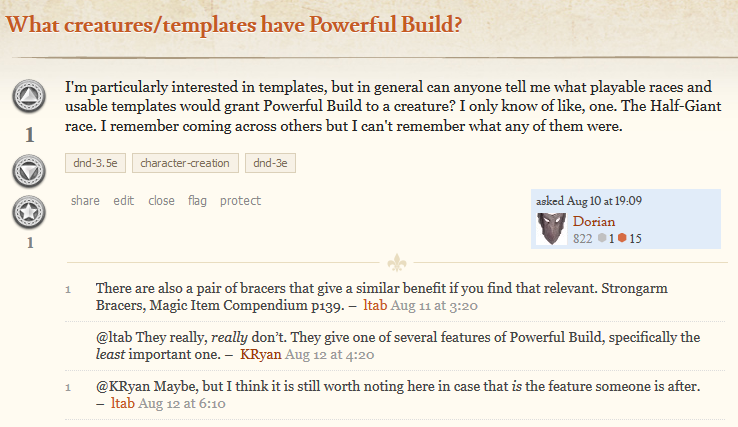 This involves D&D 3e and 3.5e somehow. But how? This question is explicitly interested in material from both editions, but what about 3e features which have been explicitly altered in 3.5e? This information isn’t specified the question.

The same author later asked a second question that did specify the important information in the question - they say at the end what systems they’re using how, and give meaning to the tags: 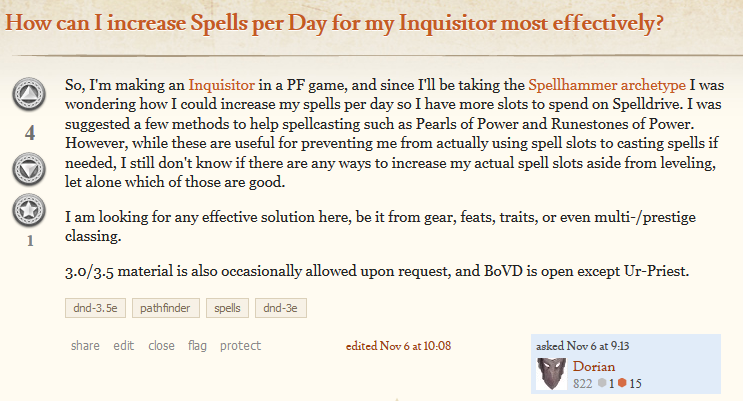 (To be doubly clear, this screenshot is an example of good behaviour, not problematic behaviour.)

Following the trend that system tags don’t need to correlate strictly to question content, there is an often-arising type of question: one that is tagged [system-agnostic], and which says: “If it helps, I’m playing in {system}”. As an example: 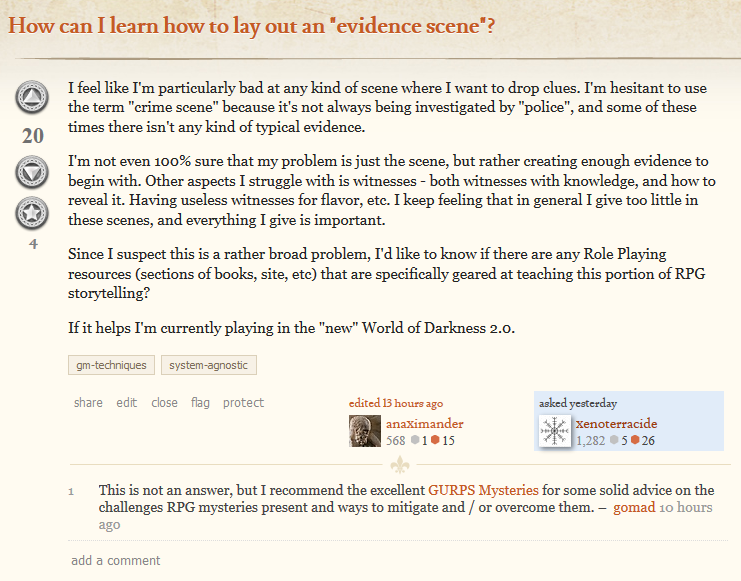 What does the [system-agnostic] tag mean here, truthfully? If we specify solutions that don’t work in NWOD 2e, we do not provide a valid answer to the querent’s problem. I retagged this particular question, put the last sentence at the beginning (and rewrote it), and left a comment: 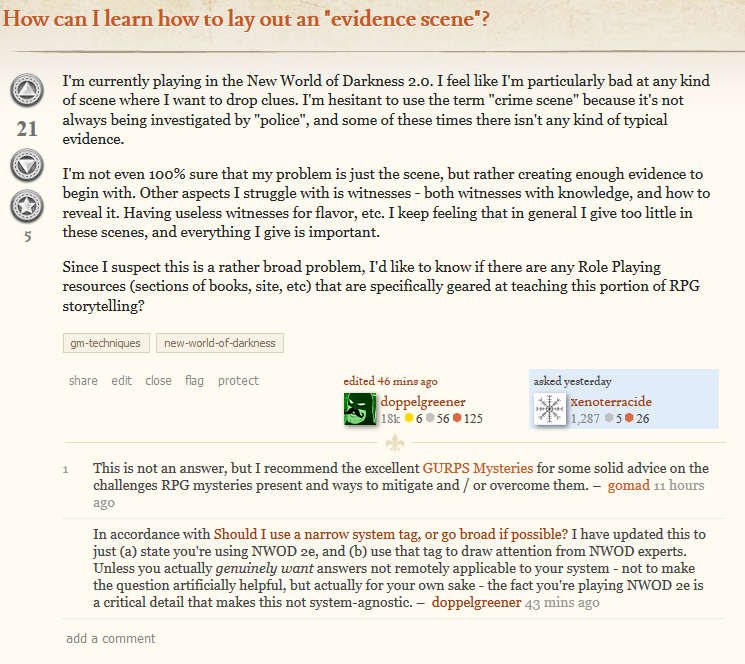 This kind of situation is why I brought up Should I use a narrow system tag, or go broad if possible and use system-agnostic? a while ago, to verify if this stance made any sense and had the community’s support.

We get a lot of questions that specify they have certain rules constraints, e.g. “please cite your answer so I can show those rules in the book to my GM.” Or, “please stick to RAW, I’m not interested in interpretations.”

However, sometimes we’ll get a question that asks how certain mechanics work, then just has a [rules-as-written tag]: 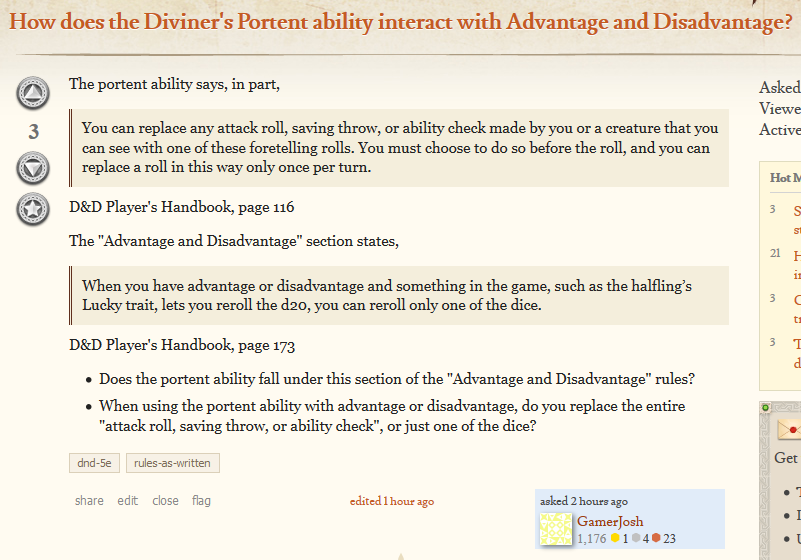 But what does the tag mean in this case? What rules-as-written constraints does the asker have? Answerers get bitten, because other readers interpret the rules-as-written tag to mean various things not described in the question, and when it’s a new user, they’d have no idea anyway: 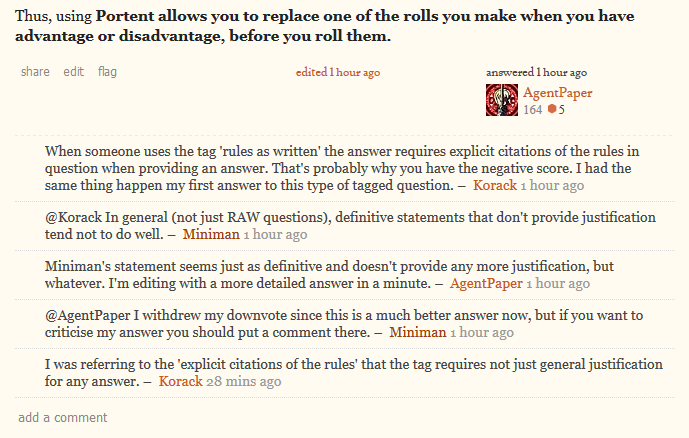 Should we do something? If so, what?

I hope I’ve at least conveyed that there’s a problem arising regularly, and some of you have probably run into these situations multiple times before.

Part of the problem is that I generally don't see these cases acted on, so the questions will still be in this state months later (if this wasn't the case I wouldn't be raising this question).

Is this enough of a problem we need to change things? If so, what should change?

This is not a problem specific to tags.

Someone can always make an unclear question. They can do it with words in the title, words in the question or words in the tags. The site response to lack of clarity is, I trust, well trod enough not to require me to go over it. Get them to clarify, vote to close if needed.

Tags do convey implicit information, which is why they exist, have tag wikis, etc. It's good, and a useful shorthand. If someone wants a system-agnostic technique they don't need to spend a paragraph explaining "I want a technique I can use across the various games I run, man". I can only imagine most attempts at doing this would lead to even more pedantic arguing in comments.

This is a long way to go for a pretty simple answer.

For example, game system tags are pretty self explanatory. If it says [dnd-5e] then it can be assumed to be a normal D&D 5e question. Some uses of tags are clear.

However, just adding a tag sometimes doesn't really give enough information, or at least is going to create bad answers. "Give me a way to alternate melee and ranged attacks" simply tagged with [feat] isn't going to sufficiently signal to an answerer that you only want feats as an answer to the question. This use of a tag is unclear.

If you do not understand a question - including its tag use - ask for clarification. It's the actual intended, constructive use of the comment system.

Reading all the comments here, rules-as-written seems to impose restrictions on the answer which is very rare for SE sites and therefor not very intuitive. Normally, tags are used to grant information and filtering about the question. I'm not sure if a tag is the correct way to impose those restrictions, but if something is required, I think we should make it easy to understand. This is a gaming website, I don't want to read the small print on all tags just to not break any rules. If this tag means that a citation from the rules is required, then by all means name it that way. answer-must-quote-rulebook or answer-requires-rule-citation or whatever else works. No small print, no hidden costs, no lawyers involved. In addition, we could use a pattern where a tag starting with answer-x-y-z sets requirements for the answer of a question. Maybe RAW will not be the only one.

This is a problem only in the cases where you've noticed a problem: tags that aren't obvious and clear from the question asked. Where the problem can be noticed though, it can be fixed and is already being solved naturally.

It's where misuse can go unnoticed and causes damage that it's a problem. And I have an idea to fix that case.

[rules-as-written] is the only tag that has this problem

So really, that just leaves rules-as-written as problematic.

To fix its misuse, I propose we recreate the rules tag as a kind of honeypot to catch people who would misuse rules-as-written, and synonym rules to something like dont-use-this-tag so that rules can remain never-used and to facilitate cleanup. It's like giving the site mind-reading powers! It should drastically cut down on the mistagging of rules-as-written, and thereby improve the quality and topicality of our answers for naive rules-question-having users.

I am not sure there is a problem to solve here. People are always going to misuse tags, and my understanding of site policy is that when it is spotted as an issue in a question, an appropriate edit should be made, with a comment if necessary. This feels no different to any of the multitude of other reasons we have to make edits.

Sure, some tags are tricky to use correctly (RAW I'm looking at you), but contorting tag mechanics in unnatural ways isn't the way to deal with this.

I think the problems in these cases mainly comes from these tags being just ambiguous enough to be a problem: when one uses [rules-as-written], [system-agnostic], or multiple system tags, there's a few different things they could mean in each case. Of course, the asker and all readers could assume they've all communicated and understood the one correct meaning, but that's unlikely. In cases like the above, the situation's left ambiguous, just that nobody's asking for clarification.

In all cases, I think we need to stop treating these tags as having implicit clear meaning, because they don't. In the cases above, I'm left having to wonder what exactly the tag means there out of the possible meanings, with no clear answer available.

Whatever information the author is attempting to communicate with these tags should be in the question to make it clear and unambiguous the sort of results they want. Then the tag can be used if it correlates to what’s being described in the question. Note this isn't a suggestion to change these tags or really change the system, it's a suggestion that we treat these situations as ambiguous, and respond as we usually would: request clarification, vote to close as unclear if necessary, etc.

As for our practice of not mentioning the system when we’re using just one and it’s tagged: that’s generally harmless, and I don't think we should change that. As SSD noted in comments, that will generally result in boilerplate that was not ambiguous to begin with.

11
Does the [system-agnostic] tag conflict with system specific tags?
18
Synonimise [rules-lawyering] to [rules-as-written], then destroy it
19
The [rules-as-written] tag is a good tag, but we've made it sick. Let's cure it
9
Should we be more pro-active about seeking clarification on questions tagged with two systems?
6
A proposal for moving forward with Rules as Written
35
A low-intervention approach [rules-as-written]: back to tagging basics
7
Why do we ask for the body of the question to demonstrate the tags it uses?
26
Add tag warnings for [rules-as-written] and [dungeons-and-dragons]
6
Is there a general usage guideline for tagging between editions of the same system where editions are very similar?