In the Role-playing games forum someone recently asked about possible usage of fictional D&D spell "Friends" which allows caster to charm someone for up to a minute, but such person will later remember the fact that it was coerced. One of the answers was suggesting "Charm guard, tell him to give you the password and then kill him so he won't rise alarm after the spell wears off". I've suggested "get brief affection of bar wench without paying" (for which someone joked "how much affection can you get in one minute?")

Why was I suspended and my comments subject to such censure?

Let's just post the comments in question here, shall we? So we all know what we're talking about? 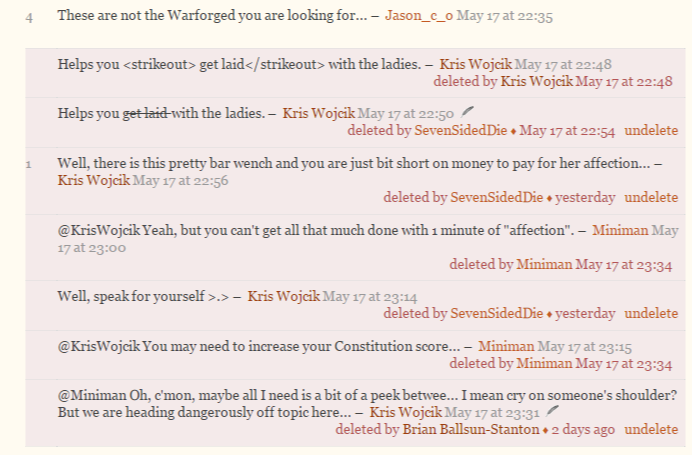 You could have just said "It's an easy way to earn her affection if you have no other means." You jumped right into getting laid, having a 'peek' and then you, yourself conceded that the waters were getting pretty muddy.

No one needs to read that garbage on our sites. Ever. Never ever ever. You're obviously not without the means to recognize territory that others would call offensive and you ignored the warnings that you received. Do not use jokes in poor taste that were subsequently posted by others as evidence that it was a good idea to write that crap, it wasn't, and I'm not going to entertain anything suggesting that it was.

If what you write on our sites can be construed by an average, reasonable person as being offensive, we remove it. It's not censorship, it's us having positively no obligation to host it on our servers.

You do raise kind of an interesting point, however.

There's all kinds of crazy stuff in games. You have things that eat babies, people babies eat, there's no limit to the bizarre. Folks have a good faith assumption that you're speaking in the context of the game, to the extent necessary to ask or answer a question.

Your comments broke that assumption, which is why you got the reaction that you did. What you typed reminded me of a woman walking past a group of young men and loud cat-calling that followed. That's how it came off to me, and I don't want that on our sites.

When someone pulls you aside and tells you "that's over the top", a good default reaction is to listen to them until you've had some time to think about it, even if you're not immediately certain where they're coming from.

Comments joking about rape are in violation of our Be Nice policy. As BESW said on your other meta question:

The Stack's policies on acceptable content are derived from the wider norms of the society in which it operates: a society more comfortable with explicit violence than with explicit sexuality--and which regards sexual violence as an especially sensitive topic. A Stack meta post is not a useful place to challenge societal norms. (You'll also want to notice that SSD is not saying you were justifying real-life sexual assault--you're just defending making jokes about it--but that your meta posts effectively invite others to do so.)

You were suspended because it, hopefully, would give you a cooling off period such that you could rejoin us in answering questions about RPGs without involving the stack in moral debates that are both outside scope and decency.

1
Words that shall not be used…