Many of us enjoy the work of our friends over at worldbuilding.SE, and their ad here has been well-received. I wonder if we'd like to reciprocate with an rpg.SE ad to run in their community promotion? (Monica Cellio has invited us to do so.)

The thought I had was something that blends imagery native to each stack, and referencing some sort of transition from building a world to playing in it.

Here's Century Gothic font, re-drawn icosahedron. Pending the font choice, I think this is the final effort I'll be putting into it. Thanks for all the feedback so far, everyone. 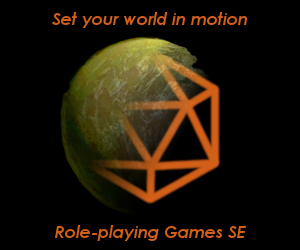 The pending suggestion was to look at the fonts, as the original was a bit... vanilla. Three possibilities: 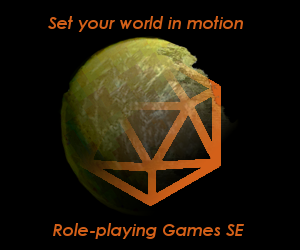 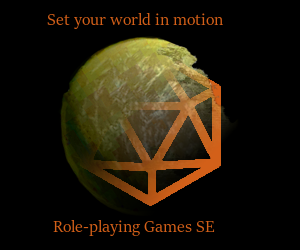 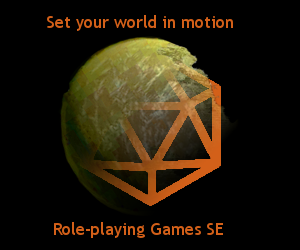 These are Century Gothic (UL), Trebuchet (UR), and Sitka Heading (LL). Whichever we settle on I'll tidy up the centering; leave a comment below if you've a preference.

(Note these still have the chunky/aliased icosahedron. Just look at the fonts.)

Feedback requested on at least these fronts: 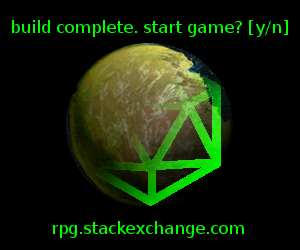 this might be way to suggestive of CRPGs, and just lead to a lot of confusion. 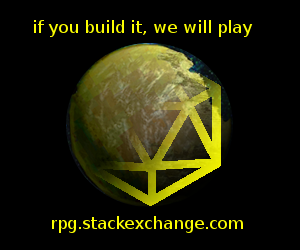 third idea, but RPG's icosahedron was too faded: 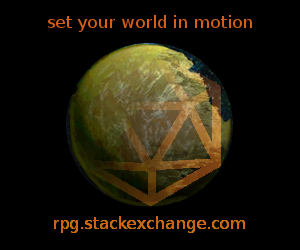 converging... but there's a sky-artifact that obscures the incomplete planet and the rpg.se address is a little clunky. (Back in the first iteration I thought the simple font and full URL lent a nice console/terminal effect, but now they're just cruft.) On the right I've made the bottom line a little less clunky, and replaced the planet-image with a better original. 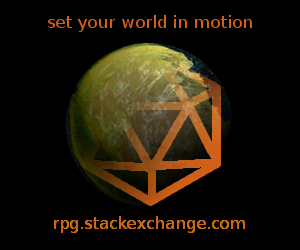 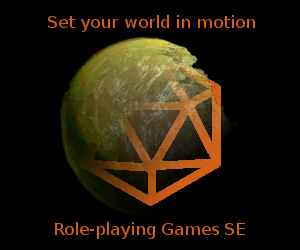 Yes, we should run an ad or ads

I like the overall design! The top-left to bottom-right fade is just the right visual flow to both catch the eye and imply the message of build-then-game that we want to convey.

I like the art in general. Having different colours for different messages is a nice touch that will make them stand out as distinct, should we submit more than one and more than one get accepted.

Another reason to not worry about the art: perfect is the enemy of good enough. This art is plenty good enough, and it would be good to just get an ad or ads over there sooner rather than later. We're also not locked into these ads forever should we come up with something amazing farther down the road.

The taglines don't work for me though. They're good starts, but carry unintentional messages:

Alternative ideas that dodge these problems:

I don't think any of these are brilliant! More ideas would be helpful.

As a enthusiastic lurker of both sites, a semi-regular contributor of worldbuilding.SE and the creator of the original ad I say:

There should definitely be an ad for rpg.SE on worldbuilding.SE and your idea is excellent.

Generally the design looks good, I have a few small points of critique though:

Other than that, I think it's fantastic. set your world in motion really is a gorgeous phrase and very fitting. The idea of using the design of our own ad is brilliant, the way it's combined is very effective. and I think the contrast betweenthe simplicity of the new elements and the complexity of the planet really demands attention.

Not the answer you're looking for? Browse other questions tagged discussion advertising .