Should the descriptions of the [animal] and [monsters] tags be amended?

Can a Giant Fire Beetle choose to not emit light?

It seems clear to me that the question warrants the animal tag over monsters, but I was told repeatedly that monsters was more appropriate, and the discussion ensued. I'll post them here in case the comments are deleted for being non-pertinent: 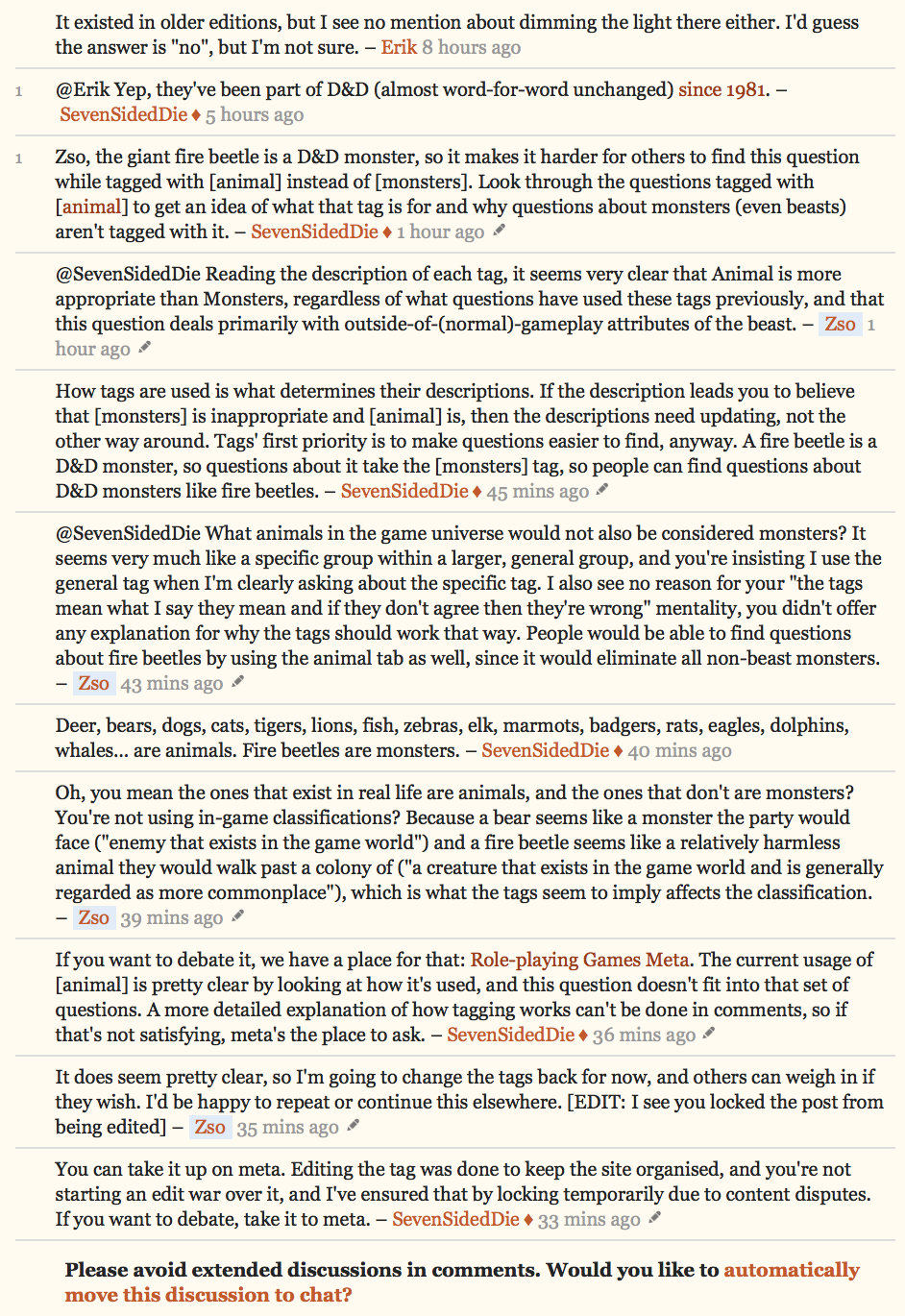 I don't understand the claim that the tags don't mean what they're described as meaning.

The tag wikis should probably be amended. The whole "more commonplace than a monster" thing is weird, considering dire wolves could be considered both an animal and a monster.

Regarding the conflict over tagging your question, I'll cite mxyzplk himself, the moderator who's usually here to blow the "it's a folksonomy!" horn:

Tagging is an emergent folksonomy. It does not need to be a strict logically correct hierarchy and overlap between two tags is not something we must do something about. Let people use the tags they find helpful and make sense to them. Overly curated tagging is IMO harmful to the point behind them and turns it into an advanced-users-only Dewey Decimal system instead of just letting people use terms that are meaningful to normal players.

Two sentences bolded by me. That means: the fuss over "it's this one, not that other one!" is wasted effort and operating on an assumption it must be just one. Use both. (Count me surprised an edit lock got used over this.)

Historically on this site, tag usage defines the wiki. The wiki doesn't have the authority to define how a tag's used — the people do through how they agree to use it, and they can change that wiki, and we've done so numerous times in the past to clarify what a tag should be about. Tag wikis just provide some guidance to reflect how we're currently using them. Neither, for that matter, does a moderator have the authority to just unilaterally decide what a tag is for. They're also citizens in this regard, not emperors, and they have to give other citizens the chance to say how the site should work unless it's violating some common agreement.

I think the underlying confusion here is procedural.

On the Stack Exchange, tags are an "emergent folksonomy." This means that each tag gets created by users at the moment a question needs it and is thereafter used as folks see fit. Nobody pro-actively curates them; tags are allowed to grow organically until/unless an active problem emerges.

Tag wikis (what you're calling definitions) are accordingly descriptive, rather than prescriptive: a tag wiki should tell us how the tag is being used, not tell us how the tag should be used. You've stumbled across a set of poor tag wikis that need to be changed to match how their tags are commonly used.

Tags need to be distinct or they're not useful. The only distinction that makes animal useful to have on the site is that it labels something particular that's different from what monsters labels. To do that it has to be distinct in how it's used.

The animal tag's history of use suggests that the community thinks that the distinct use for animal is to label questions about normal, mundane creatures — the kind of creatures you might find in a farmyard, as a beast of burden, or in a hunting forest on Earth.

So let's look at how the tag has been used. (In the process I found out that we had a pile of them that should have been tagged animal-companion instead, and fixed that in the meantime. This doesn't undermine my point because, at worse, it removes questions that would have supported my point.) The questions appear to fall into five categories:

That makes for 83% (19) questions being about very normal, mundane animals, and 17% (four) being about animal-like monsters. Sliced another way, that makes for 97% (22) questions about Earth-appearing animals of normal or giant size and 4% (one) question about a creature that doesn't appear on Earth in any size.

The question about the shadow mastiff is an obvious outlier, and is probably mistagged — it's probably more sensible to label it with monsters instead of animal.

The fire beetle is similarly out of place: it's not a mundane animal, either domestic, wild, or giant. It's a D&D creature that's was invented and is only superficially like a mundane animal. In this breakdown it would be in company with the shadow mastiff; one question is the weakest of precedents.[1] an oddity, in that it is and has been a D&D “monster” for decades without the connection to a real-world animal being obvious, but it's apparently (whether by design or accident) very similar to a giant luminous click beetle.

There is probably room for, as doppelgreener suggests (and which I already upvoted), a few odd creatures to have their questions categorised by both monsters and animal, since there are examples that are on the borderline between them and not obviously exclusively either/or, such as the dire toad and the fire beetle (and possibly giant chameleons used as riding mounts…).

The point of putting monsters on a question, regardless of what the wiki says, is so that when someone is looking for questions about monsters, they can find questions about monsters. Since giant toads, fire beetles, and such are widely considered monsters by the playerbase of D&D, they should turn up when browsing D&D questions tagged with monsters. Similarly, creatures that are archetypically animals should show up when browsing animal; I don't think fire beetles (or dire toads or giant chameleons) are what people browsing that tag will be looking for, given its overwhelming use for very mundane, domestic animals… but they're on the borderline, yes, and an argument can be reasonably made for including them.

So to answer the titular question: yes, the tag wikis don't seem to describe how the tags are actually used, so they should be amended to match actual usage.

Not the answer you're looking for? Browse other questions tagged discussion tags .

4
How can we make sure [new-players] and [system-introduction] are distinct?

9
Is [system-agnostic] a meta tag?
5
How can I request the reason for my comment being deleted?
8
When should I comment?
25
Let's talk about 8chan
2
One-sided comment moderation
12
Are questions of the form "what are all the X with property Y" on-topic?
12
The [story] tag should be merged with the [plot] tag
17
'We do not enforce style' - how to react to discrepancies between policy and reality?
11
How has RPG.se used protection? (crunching the numbers on spam and protection)
7
Dealing with More Comments After Movements to Chat as a User