I just got First Responder (and it isn't New Years yet) 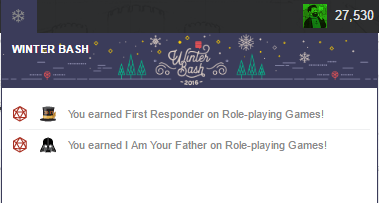 Despite the fact that shouldn't be possible for 2017 yet:

But I did have a message starred in chat around new years' during last Winterbash. Did the year not get set properly?

I haven't had a message posted by me starred in chat for a few days.

Yeah, that was a bug. Fixed now, thanks! The details are in First Responder hat of the 2016 winter bash.

Not the answer you're looking for? Browse other questions tagged bug winterbash-2016 .