Am I making too trivial edits to closed recent questions?

I recently made edits to this question. It was a rather new question at the time of editing, but it was already put on hold.

Would the edits made be considered too trivial? I got to thinking about it after I made the edit, and it didn't really feel like that great of an edit besides correcting the spelling and grammatical issues, some of which were in the title thus appearing on the main site's feed. It fit one of the common reasons to make an edit outlined in the help section. Should have I at least waited until the OP improved his question?

I'm still rather new here, just started being active in the community this past month and would like to follow best practices on the site.

Your edit was fine, and it was approved by two others. You made several good changes where they should've been made — we don't use text speech here, etc. If your edit was a problem it would've been rejected, and so far your edits have been helpful and approved. Thanks for suggesting those improvements, good work.

I feel that editing a closed question is low priority (unless I can help it get reopened), but there's no harm in editing them. You'll show the querent a higher quality bar, and may clear the way for others to do some editing and help get the question reopened.

Look out for the things you think you can fix in the post and address them if you feel you can. As long as you do that your questions won't be too trivial. If you can't, it's OK to leave things to other people.

For the record these are the options we get when choosing to reject a suggested edit. You'll notice there's no "too trivial": to get an edit rejected you basically have to make the post actively worse, or do nothing at all helpful, like making stylistic changes which have zero impact on readability. 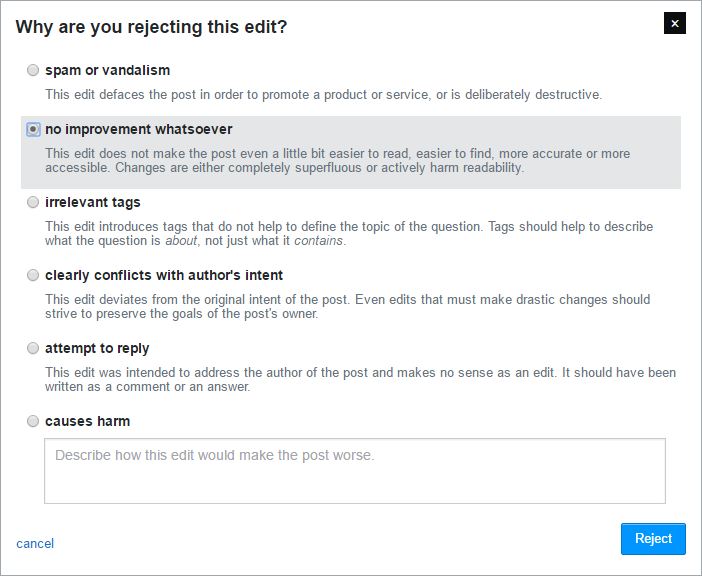 (This is a screenshot from Stack Overflow.)

There is one bit of potential harm from editing a closed question.

When you edit a question, people with the power to re-open closed questions are automatically notified of the edit, and are prompted to vote to either re-open the question or leave it closed. However, this only happens on the first edit of a closed question.

Users with the power to vote to re-open won't be notified if the question is edited in a way that justifies it being re-opened. They can still happen across the question and place their votes to re-open it when they do, but they're less likely to notice that an edit has taken place... Which means that making trivial edits to a closed question slightly reduces the chance of it being re-opened if it's later edited in a way that actually makes it site-appropriate.

Of course, it's entirely possible that the question will never be edited again, and so will never be re-opened; It's also possible that the question shouldn't have been closed in the first place. In either case, making trivial edits does no harm. Besides, as doppelgreener's answer says, you're allowed to make trivial edits to closed questions regardless of the circumstances, so you should feel free to do so. Just be aware that such edits just might prevent the question from being re-opened.

4
Should questions be for trivial definitions?
8
Editing someone else's answer vs. commenting
17
'We do not enforce style' - how to react to discrepancies between policy and reality?
12
How Trivial an Edit is Too Trivial to Make?
2
On "active" answer ordering and micro-edits
7
How to handle this new user accidentally making multiple accounts and suggesting edits to their own question?
55
to every thing there is a season