We've just been informed that we're taking part in an experiment on a more aggressive review queue indicator. Apparently, this should make it so that a red dot appears on the review queue icon in the top bar as long as there's at least one pending review task.

My top bar currently does not have a dot on the review queue, red, gray, or otherwise:

To the best of my knowledge, I have never seen an indicator on this icon. It's always just a bare icon, like in that screenshot (although it has, of course, undergone some formatting changes over time).

However, there is a pending review task right now: 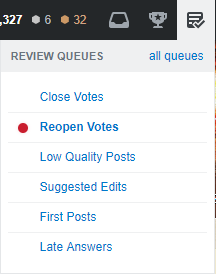 This should be giving me a review notification of some kind, right?

I'm getting this too. The review queue indicator right now:

But when I open it, lo and behold, a review item! 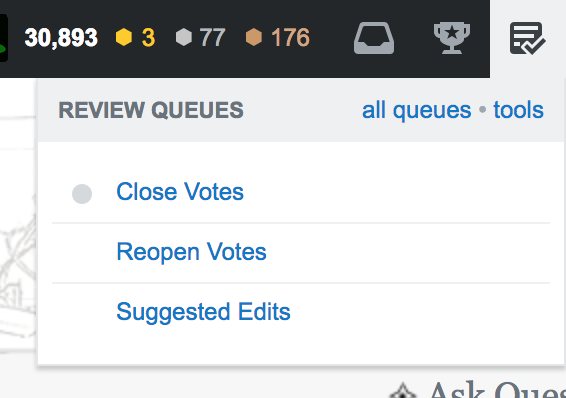 The same is happening on main site: 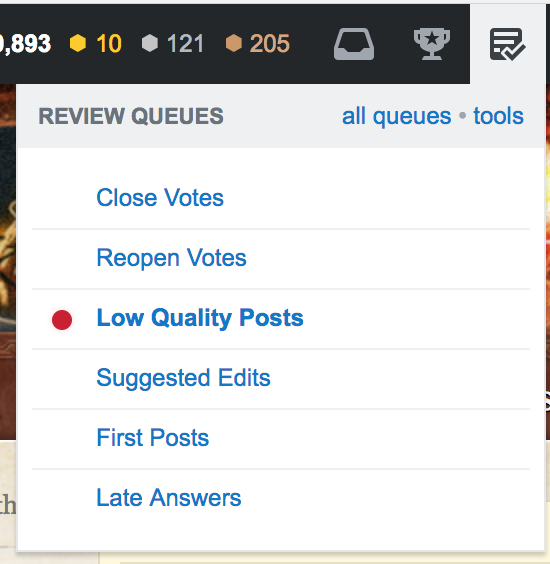 I have never gotten the red dot in Edge, IE 10, nor in Chrome in the top bar before opening. I have at seemingly random intervals gotten a red dot next to whatever item in the review queue I need to take a look at, but most often they are still gray.

I will update this answer if I ever do get the red dot in the bar. I had no idea that the red dot was supposed to tell me to open the reviews, I just open them because that's something I do to see what community mod assistance I can offer. I have run into that off and on since the red dot thing began.

The above is true on all SE's where I participate and am able to do community modding things: RPG, Christianity, Aviation, History, SFF.

My further problem is that with the red dots, it frequently stays red after I have completed the action of the review. Just did that this morning at Christianity.SE. Had a long review queue with the red dot, went through them, no questions left to review for "low quality posts", and when I opened it again the red dot was still there but nothing to review. Browser = Chrome; it had happened in Edge and IE previously. Neither Aviation nor History review queues showed red this morning, but one review choice in RPG.SE had red dot and it cleared fine when I was done.

As of this morning, as a follow up a few days later, the red dot appeared in my menu bar for reviewing various actions on RPG.SE. Two review queues indicated via red dot that I had things to review, and the red dot stayed in the second of the two queues until I had completed each review. It appears for the moment that the red dot may be working as intended.

Then again, as of this afternoon, I got no red button alert but when I opened the drop down to see if there's stuff in the review queue, there was a red dot indicating that I had a task to review. Still not working as intended, apparently.

A day later, it works differently again, in terms of no red dot on the menu bar but red dots on a couple of review queues.

Wow, look at what I found this morning! 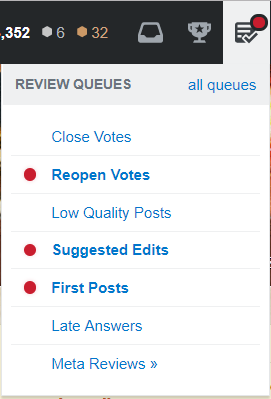 If I can figure out more about the indicator's new behavior, I'll update this answer, but for now, it looks like it's working.

Followup: As of my next login (~8 hours after this answer was originally posted), I found no indicator on the review icon, but one pending review task. Perhaps this morning's success was due to the fact that there were several pending review tasks?

Not the answer you're looking for? Browse other questions tagged support bug status-completed review top-bar .

3
There is a bug that began a day or so ago, IE 10
11
Experiment: More aggressive review queue indicator