So this question is currently being looked at for various reasons, but I note the following (I assume Mod) comment:

Hey, guys, voting to close and downvoting don't have to go hand-in-hand. VTC as unclear, and hold off on the downvotes unless you actually think there's something bad or not useful about this question. It doesn't seem to warrant a -3 score to me, at least.

Here are the guidelines on downvoting:

When should I vote down?

Use your downvotes whenever you encounter an egregiously sloppy, no-effort-expended post, or an answer that is clearly and perhaps dangerously incorrect.

Here is the offending post at time of posting this:

So I'm making a campaign that involves a half-elf named Ebveron being captured by half-ling followers of Nerva and being turned into a lich against his own will & used as a high-level assassin. Until he (finally) after 5 years musters up the courage to escape (WITH HIS PHYLACTERY). Unfortunately this whole "killing people and using their souls" crap doesn't exactly work with him (keep in mind he's a calligrapher/sage & a pacifist) so in complete desperation he make a deal with a grandmother hag and is tricked into staying in a mountain for 35, only breaking out when the party (including his daughter Phina[PC]) kills the hag, and in the process sees him reform in front of his phylactery (i've shortened the time to reform but the mountain is a week away from the nearest town) in turn breaking his illusion spell.

Other facts: at the time of posting this is currently at a stable "0" equilibrium of votes. Last night it was at least at -3. My "downvote" is still highlighted red.

Putting this all together, it seems that the Mods stepped in and removed downvotes on a post that people are voting down because it clearly fits the guidelines of what to vote down:

So getting to the final point of the question: Did mods actually remove votes on this question and/or why is it acceptable for mods to remove votes? Why is that even a feature?

Should we consider designing a system to:

I get that I have some tinfoil going here, but the correlation of the downvotes getting cancelled out and someone saying "hey we shouldn't be downvoting this" is obvious and seems to show that the voting system has been subverted. I have a hard time believing people upvoted this question.

Apologies if the tinfoil is unwarranted here.

No worries, mods are unable to affect votes. That’s not a feature or power we have. Votes are sacrosanct at RPG.se and people can vote however their consciences are called to.

(Only Staff — Stack Exchange employees who rank above the volunteer mods — can invalidate votes, and then only when revenge voting or similar serious abuses of voting privileges are absolutely confirmed. This is rare enough that I can’t remember when the last time I saw it happen at RPG.se was. Mods don’t have this vote correction power.)

Aside, the user who commented isn’t a mod. You can tell us by the diamond after the name, and there’s a full list of us found by following the link at the end of the help article “Who are the site moderators, and what is their role here?”

(Aside to the aside, because voting is sacrosanct here, we’re not fond of seeing anyone on the main site telling people how to vote. I’ve deleted that comment. How to best use votes does get discussed here on meta, but on main it’s rarely appropriate to tell others how to vote.)

Yes, people did upvote it

What happened here is others have upvoted. The score shows the total of up- and downvotes, so at a score of zero you’re seeing an equal number of upvotes and downvotes. Currently that question is sitting at +3/−3 for a net Post Score of 0: 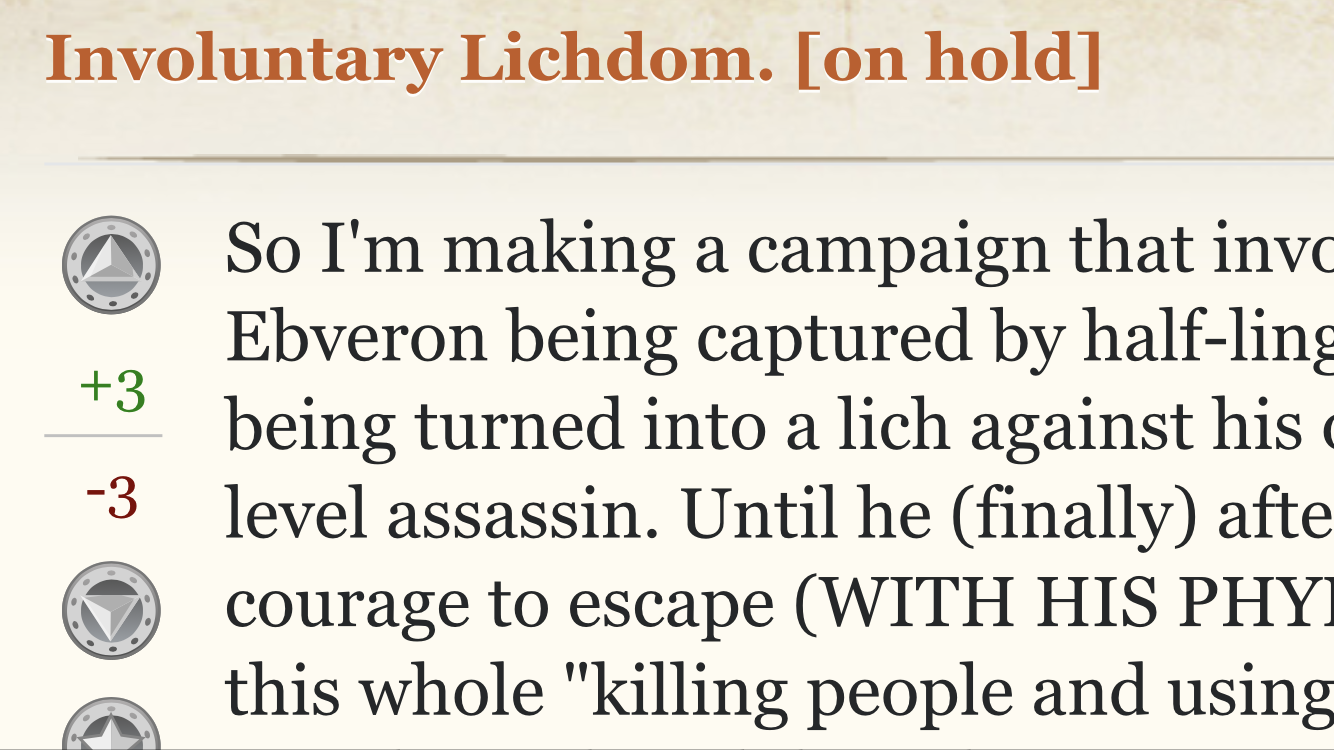 With 1,000 reputation, you’ll unlock the “Established User” privilege and be able to see the actual vote totals split out by direction like that.

But why are there any upvotes?

Why would anyone upvote though? I can only guess, but I’ve seen enough around here to offer a reasonable guess: they objecte to the downvotes and wanted to balance them out.

Is this a good reason? I don’t think so, but it’s their vote, so they can vote that way if they want. Personally, I think it’s a bad idea because it’s not neutral to cancel votes this way: a downvote plus an upvote may cancel out in the score, but they’re asymmetrical in reputation: a downvote is −2 at most (and −0 when they’re still at 1 rep) but an upvote is +5 on a question, leaving this asker with (what I think is) an unearned +15 reputation. Sure, they can’t do much with 16 rep and they’re unlikely to get anywhere near important privileges without turning out to be a good community member, but it does personally irk me to see that side effect of people voting to balance downvotes on what I think is a pretty downvote-worthy question regardless of whether it’s hold-worthy.

Other may not have thought about that effect, or they may (with some truth) deem that side effect small or unimportant enough to not matter. This is why I stress “personal” in my view in the previous paragraph: again, votes are sacrosanct and I can’t assume that those voters are voting badly, just that I disagree with their valid votes — and if I wish, I can vote my conscience. ;)

Not the answer you're looking for? Browse other questions tagged feature-request status-bydesign voting .