These days I come to the site in the morning and I usually see 10, 15, even 25 posts in the mod-queue with flags waiting to be handled. When I started (two+ years ago) it was usually more like 2 or 3 posts.

I wondered aloud how much of an uptick there'd been in flagging recently, and SE staff were kind enough to rip off a quick visualization: 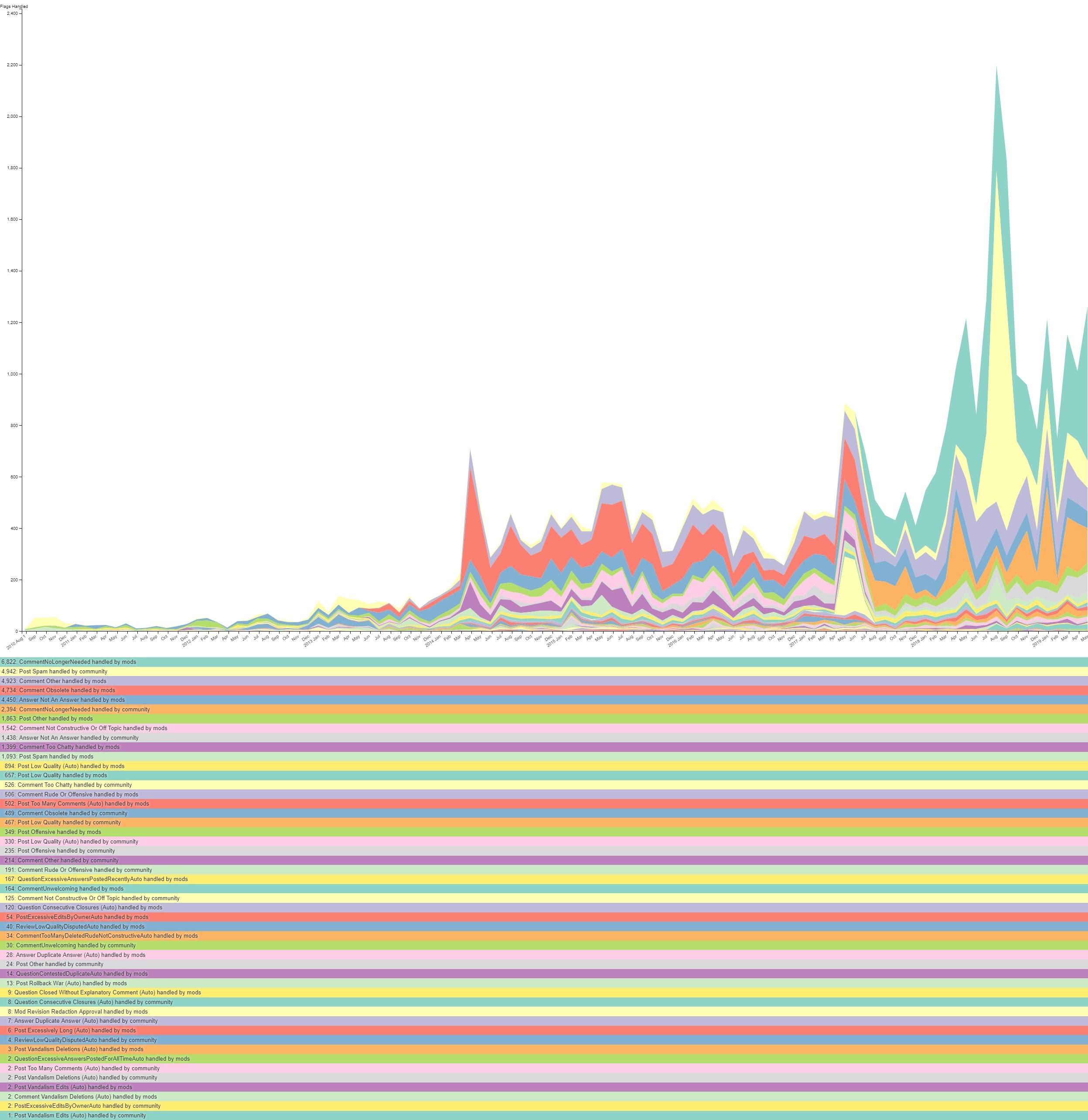 That's count of flags per month on the vertical axis, month on the horizontal, and a legend of the stacked lines below. Even without clicking in you can see that flags are up quite a bit recently.

The huge spike toward the end is because of a spam wave we had at the time.

I don't think there's anything wrong here. But this uptick in flagging does lead to a commensurate increase in moderation activity, and most of that activity occurs in a behind-the-scenes way that you-all can't really see or know about. (Except inasmuch as it affects your posts or flags.) So I wanted to get it out there publicly.

Some unordered observations of my own:

I would say there are many reasons but the most likely is purely a numbers game. This looks like non-linear growth with step changes.

The non-linear nature I would put down to number of users reviewing * number of questions * number answers, all of which should be steadily increasing on a healthy SE site.

I would put the steps down to singular events, such as: a user who has a passion for flagging joining the site, or a post on flagging highlighting it to more users.

I agree with your main point there does not seem to be anything wrong here. I am also going to ask the very helpful SE staff if they can run me one of these off for Homebrew forum; you have piqued my interest.

Not the answer you're looking for? Browse other questions tagged discussion moderation flagging .

3
"Rude or offensive:" how does the nature of the offense and its visibility influence flag responses?
15
The new comment flags seem like they fail to track some info we used to be able to track
11
Why was my NaA flag declined?
13
2018: a year in moderation
11
How has RPG.se used protection? (crunching the numbers on spam and protection)
7
Dealing with More Comments After Movements to Chat as a User
8
2020: a year in moderation
2
What can we do as a community to take flagging obsolete comments more seriously?
5
Did I incorrectly flag these posts?