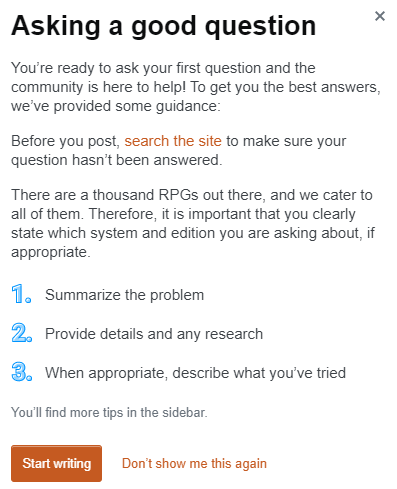 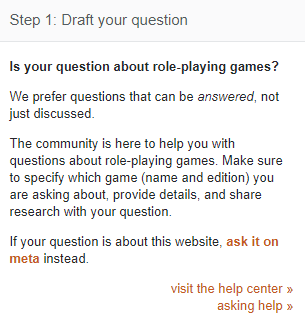 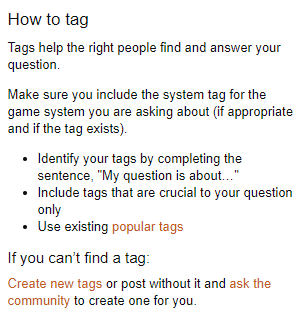 42
Re-revisiting the "don't guess the system" policy
33
Revisit III: Don’t Guess the System policy
44
Can our tag-prompt nudge toward including system?
17
Can the system tag policy be stated to askers in advance?
3
Does the community agree with the part of the "never guess" policy regarding asking meta first?
14
Can/should we include the system tag requirement in our tour?
14
Can we look at the contrast on tag warnings?
11
2020 Moderator Election Q&A - Questionnaire
13
There's a new Ask a Question page!
5
Get the SE system to enforce system tags
See more linked questions

3
How to tag different styles of LARP?
29
Please fix the spacing for our header styles (it's backwards) and our H3 sizing. Fix suggested inside
3
Are we satisfied with the Tag Wiki / Info entry for the RAW Tag?
5
How can I help a new user reformulate their first question?
28
You can help new users identify their D&D edition!
13
There's a new Ask a Question page!
11
TRPG General Chat: vote for your feeds! (2e: Electric Bugaloobear)
11
2020 Moderator Election Q&A - Questionnaire
33
Revisit III: Don’t Guess the System policy
13
Is a dark mode for this site realistically possible and desirable, and can we in any way support its introduction?